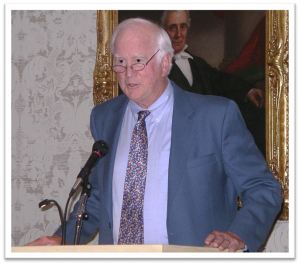 Towny’s first book, The Fourteenth Chronicle: Letters and Diaries of John Dos Passos (1973) was the prelude to his well-received biography, John Dos Passos: A Twentieth Century Odyssey (1980). His next biography, Marsden Hartley: The Biography of an American Artist, 1992, was nominated for a Pulitzer Prize, and led to the publication of Seeking the Spiritual: The Paintings of Marsden Hartley (1998). A collection of essays he edited, A Modern Mosaic: Art and Modernism in the United States (2000) extended the discussion of modernism through literature, art, architecture, and society. His scholarly works won him widespread recognition, including the North Carolina Mayflower Cup Award in 1982 (for his Dos Passos biography).

During his career, Towny Ludington lectured all around the world, including France, Spain, Holland, Germany, Northern Ireland, India, Italy, Brazil, Switzerland, Yugoslavia, Estonia, and Latvia. He helped produce films, directed two NEH Summer Institutes, served on visiting committees, prize committees, NEH review panels, and committees of professional organizations. He went “on the road” as a Fulbright Lecturer in Lyon, France, as a visiting Professor at the U.S. Military Academy at West Point, and as the Resident Scholar at the U.S. International Communication Agency in Washington. At UNC, he was influential in the creation of the African American Studies Curriculum and in establishing American Indian Studies as an essential part of American Studies. He held numerous university-wide positions and served for many years on the Board of Governors for UNC Press.

Towny Ludington inspired loyalty and appreciation from students who worked with him. On the occasion of his retirement, UNC alumni endowed a chair in his name, the Townsend Ludington Chair in American Studies, and former students from around the world came to Chapel Hill to pay tribute to him. His students, like his colleagues, attest to his warmth, his humor, his insight, his unfailing interest in their thoughts, dreams, and dilemmas. One of the tallest members of the faculty, with one of the most booming voices and irrepressible laughs, he was a beloved and influential teacher and colleague. The family has asked that memorial gifts be given to his Professorship or first generation students in his honor.