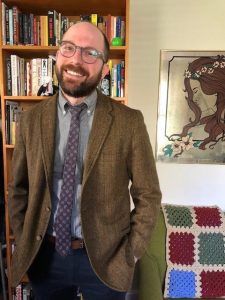 Mathew Swiatlowski, a postdoctoral teaching assistant professor of American Studies, conducts research at the intersection of media, technology, and cultural studies. With a deep interest in historiography, he is animated by questions of process and power in the production of historical knowledge. His research interrogates gaps and silences in the historical record, with an emphasis on the command of race, class, gender, and ability to structure experience and bracket possibility across the twentieth and twenty-first centuries.

His book project, The Sound of Ethnic America: Prewar “Foreign-Language” Recordings and the Sonics of U.S. Citizenship, explores the juncture of sound and citizenship to consider how the boundaries of the nation are maintained at both geospatial and cultural borders. The project maps the trajectory of domestically produced, music recordings of immigrant musicians from Eastern and Southern Europe, Mexico, and East Asia as they transform from “foreign” or “foreign-language” 78rpm shellac discs to historical “ethnic” and “world music” recordings of the LP and CD eras, respectively. On one hand, the project is a media history of US ethnic music recordings from the 1920s and 1930s. On the other, it is a critical examination of the interplay between immigration policy and the racial logics of citizenship.