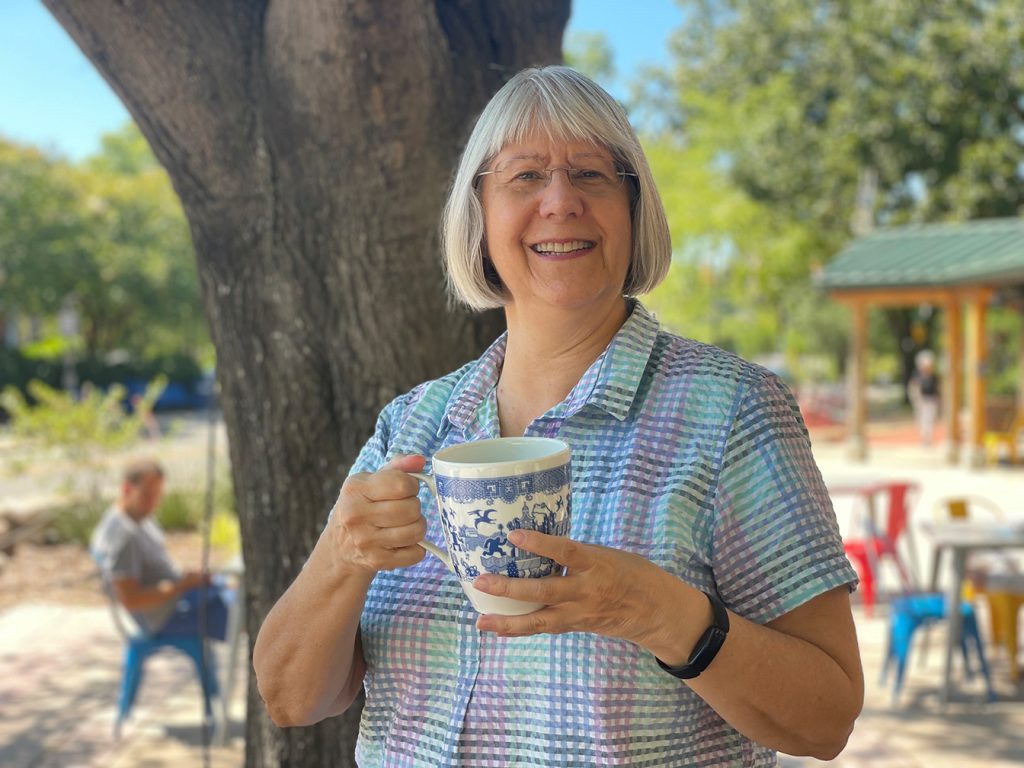 This week we’re chatting with Patricia Sawin, Chair of the Department of American Studies, specializing in the everyday stories that people tell to make sense of their experiences and to share a little of themselves in an engaging way . Read on to learn more about her work, hobbies, and advice she values.

My first answer is home for me is Boulder, Colorado. That’s where I grew up. Lived there until I went to college and then again for about five years before I went to graduate school. So, there are lots of ways in which I still think of myself as a Colorado girl or a Boulder girl. And yet, I’ve been in Chapel Hill for 23 years and actually for a few years at an earlier stage. This is home for my daughter and very much home for my partner, Bron. After 23 years. Chapel Hill is starting to get a hold of me.

Q: How would you describe your research to an undergraduate?  What’s your latest project?

My current research–stuff I’m involved in right now–is about memes. That’s because my own students have told me that in using memes with each other, that’s where they are figuring out attitudes towards pressing issues, sometimes local, often national or larger. So that connects to my interest in legends and to my interest in the way people tell stories, not only the content, but how you shape them, how you aim them for particular audiences, how you use multiple resources. In this case, the images and people’s familiarity with the images, and that then connects with an interest in what we can call allusion, or the fancy word is intertextuality. But it really means we all have these things that we already know, whether they’re words or images or ideas, and we sometimes use them explicitly and we often actually draw on them implicitly, particularly to build bridges with other people. There’s a long answer to a short question.

Right now, I am working on an analysis of the Twitter and Facebook feeds around a person who now represents herself as Jorts (and Jean). Their twitter bio is “Jorts the Cat and Jean Helps Me.” I got interested in it in part because I love cats and in part because [of] the original poster’s issue. She posted something on Reddit describing that there were these two cats, one very smart, one not very smart in their workplace. Jorts is the orange cat. I now know that there’s a tradition that all orange cats have one brain cell among them, and they share it. So you can say, like, “Today wasn’t the day that my cat got the brain cell.” But Jorts kept falling in the trash can, getting locked in the storage closet, and didn’t apparently do a very good job of cleaning himself. And so a colleague, a volunteer at this organization, was doing things to try to train him. The manager who wrote, said, “No, that’s just what these cats are.” The volunteer actually accused her of being racist on the grounds that she was stereotyping the orange cat. So, she wrote a Reddit thing called “Am I the Asshole?” And most people said no. But that person has started a Twitter feed and one of the things is that it’s around issues of labor and labor rights.

And so, Jean and Jorts have become great supporters of the people at Amazon and at Starbucks who are unionizing. Most recently, there are farmworkers who are marching in California and trying to get the governor to sign a bill. Apparently, the governor is largely in favor, but there’s some wrinkle that they’re still working out. So, every day on the Jorts (and Jean) Twitter, there’s a picture of the people who are marching and another picture of Jorts photoshopped in and holding a sign going, “Day 27 of marching with the farmworkers. Gavin Newsom, you should do this.” So three of us folklorists who all love cats are going to do a project at the American Folklore Society conference this fall. Andrea Kitta, who teaches at East Carolina, is writing about disability and Jorts. Do we just make accommodations for Jorts like propping open the supply closet? I’m going to do the laborlore issues. I think it’s actually really interesting to say that here’s this Twitter feed and one moment it’s Jorts going, “Look at my adorable little feetsies.” And the next moment, it’s taking on a really serious labor issue. Sabina Magliocco, who now teaches at University of British Columbia is going to work on the larger issue of cats on the Internet. One of the things that I love about folklore is that it can be really silly and really serious at the same time. I think, also, I mean, we’re all so worried about the ways that social media gives an opportunity for people to interact in really ugly ways and divisive ways and to see like, what are the ways in which it might actually, you know, bring people together or do some positive things? Being me, I like that. I hold on to hope.

Well, there’s an easy recent one, which is actually getting to hood Maxine Vande Vaarst. She has been my only so far and probably my only ever doctoral student. She did really fascinating work on squatters and urban explorers. That was a great moment. This was somebody who was doing unconventional stuff, but really good stuff. To be there with her was really exciting. I think another one was probably when I finished my book about Mrs. Eldreth and was able to give that to my parents, who are both academics. They did more literature. My mom was interested in film. But to say, “See, here’s something that comes out of what you supported me in doing and it connects to all the literary work.”

I actually don’t listen to a lot of music. What I do listen to these days is recorded books. The current thing that keeps me amused and sane is listening to British mystery novels.

There’s actually a BBC series based on the Vera Stanhope novels by Ann Cleeves. I love the way that over the course of a series of about ten novels this sort of crotchety, difficult, interesting middle-to-older-aged woman–she’s like fifties or sixties–and you learn about her and her childhood. Even though mystery novels are still like, they’re not that great, but you see the way the characters get developed over this series of things. But I think I love her most because I identify with her in a variety of ways.

I love to swim, particularly in the summertime when I can go to a little pool at an old Presbyterian camp that you can join for cheap. I love to swim outside. And a certain amount of gardening, but we don’t have much sun in our yard, so I’m still kind of figuring out whether I can dare to cut down another tree or two. I’m getting really interested in native plants and supporting the native ecosystem.

When I was trying to finish my book, my mother sent me a little card that had a quotation supposedly from Samuel Johnson, who was an important 18th century [writer]. He sort of put together the first dictionary and he was a very famous kind of commenter on society at that time in England. The little thing said–and it was all in “he” language–but it was basically, “He who does his best no matter how little is to be preferred to he who does nothing at all.” It seems to me that particularly in academia, it’s so easy to look at the stars around us and just feel like, “Oh my God, I’m never going to be. . ..” And just to get up today and do a little piece that you can do and to remember that your little piece is useful to different people than somebody else’s little or big piece.

Q: What is something you are looking forward to this academic year?

I have several options here. I’m looking forward to the party on September the 8th. I’m looking forward to getting to be together with people again. The social interaction really feeds me emotionally. As much as I am an introvert, and I actually have not minded being at home for two years, but now when I get to come out and meet with folks like you or talk in my office with colleagues, it’s like, “Oh, yeah.” There’s so much more that we can get from being in person.

And I’m looking forward to stabilizing the department. Sharon Holland got a lot of important changes implemented while she was chair, notably our new more unified undergraduate curriculum. And she had to fight the monsters as the COVID pandemic threw us into disarray. So now we get to breathe and see how those innovations play out and take stock. I’m excited about helping make sure that happens productively.