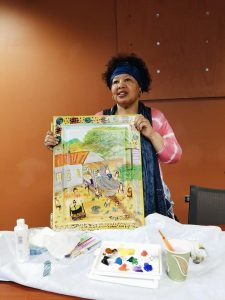 This Spring the Department of American Studies presents the 2018 Caldwell Family Artists-in-Residence. The residencies recognize the department’s long-standing commitment to including the arts in foundational curriculum and challenge it to forge interdisciplinary relationships with other departments and the broader community. This spring we were pleased to welcome self-taught North Carolina visual artist Theresa Gloster, who visited campus from March 26-April 6.

Theresa Gloster is a self-taught painter whose paintings exuberantly chronicle her childhood years in the small African American community of Bushtown, in North Carolina’s Caldwell County. Born in a West Virginia mining camp, Ms. Gloster grew up in the foothills of North Carolina, w

here she lived with her grandparents in a household that included twelve children. More than five decades later, Ms. Gloster still lives in that same community, in a home that now serves as an informal community center—a site regularly filled with family members and n

eighborhood children, and with painted memories that grace both hanging canvases and the house’s walls.

For most of her adult life, Ms. Gloster has worked as a beautician in a local beauty salon, a pursuit that undoubtedly honed her eye for colors, shading, and movement. She never painted, though, until her late forties, when she asked the Lord for a blessing that would allow her to know what “excellence” in His service might mean. She petitioned God for direction, and was led to know—to her surprise—that she was “supposed to” paint. Puzzled but obedient, she pondered what she might paint, and again found herself discerning the answer—the subject was to be her own life. 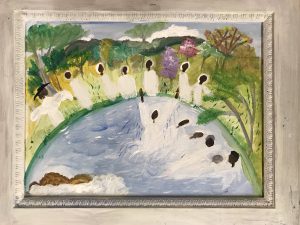 A trip to the hardware store for a bagful of paints thus began her journey as an artist, a journey that has since broadened to include clothing design and the creation of found-object assemblages.

At the heart of all her creations, though, are Ms. Gloster’s paintings, which chronicle a time of lived community, a time when families worked together to overcome the hardships of segregation and marginalization, a time that Ms. Gloster describes as one of collective transcending. The images are neither overly romantic nor overtly critical; instead, they’re simply—in Ms. Gloster’s words—“true,” tying together the lived threads of history, inspiration, and artistry. Each stands as a painted testimony to life in the South, a life both lived then and—through these images—lived again now.

Ms. Gloster began this painting at the start of her residency—an Easter scene. She’ll continue working on it tonight as she shares her creative process and the memories captured in her work. pic.twitter.com/3vINlzDnlE